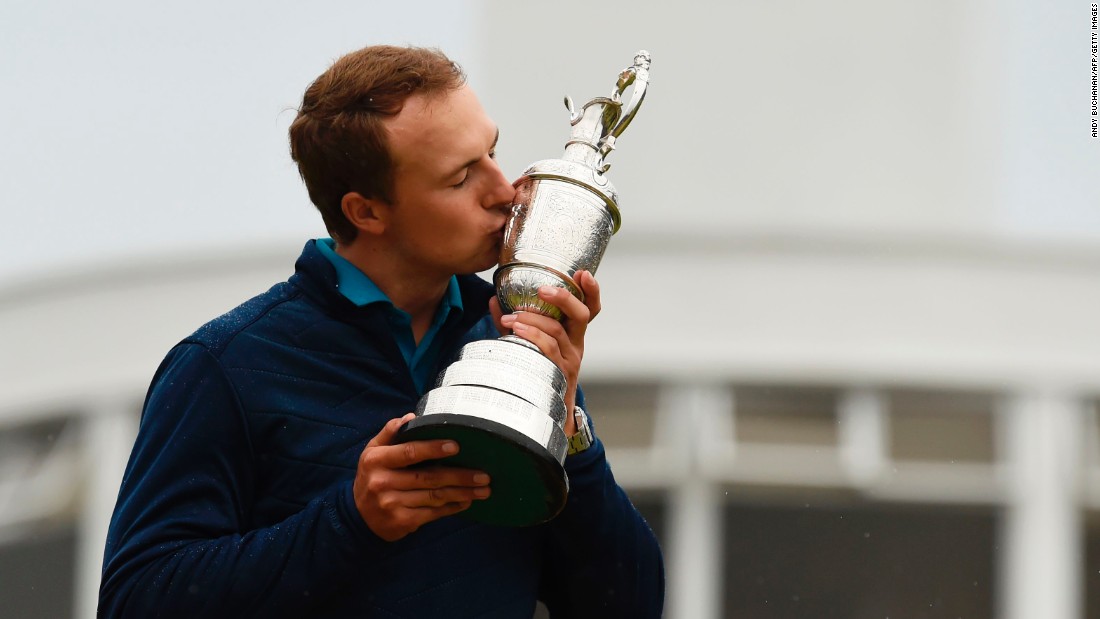 And after Sunday’s rollercoaster final day at the British Open, newly-crowned champion Jordan Spieth knows just how hard it can be to win a major golf tournament.
The 23-year-old had to scrap for his third major triumph, recovering from four bogeys on the front nine — and a nightmare drive off the 13th tee that resulted in a 20-minute delay — to get his challenge back on course.
Spieth hit a shot from near the practice green to within feet of the green, limiting the damage to just a bogey — a “momentum shift,” his caddie Michael Greller called it.
What followed immediately after was a run of birdie, eagle, birdie, birdie that wrestled control back from playing partner Matt Kuchar, who had momentarily turned a three-shot deficit to Spieth into a one-shot lead.

READ: What’s it like managing the ‘John Wayne’ of golf?
“I’ve been on these roller coasters before, it’s just kind of how it works,” Spieth told CNN’s Alex Thomas after lifting the Claret Jug at Royal Birkdale.
“We had one guy come in and make it look extremely easy and that’s Tiger Woods. I wouldn’t expect that from other people and it’s almost unfair that he made it look so easy, it’s almost unfair to us because it’s just not.”
Earlier this month 14-time major Woods, who spent 683 weeks as world No. 1, dropped out of the top 1,000 in golf’s official world rankings for the first time in his career.

READ: Spieth says his autistic sister is his inspiration

Spieth had lost his three-shot overnight lead after four holes of the final round, in scenes reminiscent of his infamous Masters meltdown of 2016.
The nadir of his collapse arrived as he carved a drive way right into high dunes on Royal Birkdale’s 13th before declaring the ball unplayable.
The ensuing delay while he worked out a place to take a penalty drop on the adjacent practice range appeard all-too-similar to Spieth’s public unraveling on Augusta’s 12th hole when he twice found water to blow the lead last year.

“It’s always needed, it’s never easy to win golf tournaments,” he said. “If I lost it then I was going to lose the golf tournament so I had one thing I could do, which was to stay present, recognize I could make five and figure a way to do so.
“It took three really good shots and a lot of patience. We were able to do it and at that point I thought I stole one. When you think you steal one when you’ve been given them away the whole day that’s a totally different feeling.”

The episode at the 13th hole left Spieth trailing Kuchar by one, but it seemingly reinvigorated the would-be champion as he came close to a hole-in-one at the 14th before sinking a huge putt for eagle across the 15th green.
The US PGA, the year’s final major, takes place at Quail Hollow in Charlotte, North Carolina next month, and Spieth says completing his collection will be foremost in his mind.
“Tons of motivation,” he said. “The PGA from now on I will always have that headline and something that I’m thinking about. I’m glad I only have one leg left. We’re in form and it’s only a few weeks away.”
Before then, he intends to celebrate his 24th birthday Thursday with a fishing trip with his dad and brother Steven to celebrate his brother’s graduation from Brown University.
“I think they’ve decided and they are going to let me know when I get back,” he said.
Visit CNN.com/golf for more news and videos
“I’m excited to go home and see my family, I miss them a lot and it’s going to be really nice bringing this trophy back to the States.”