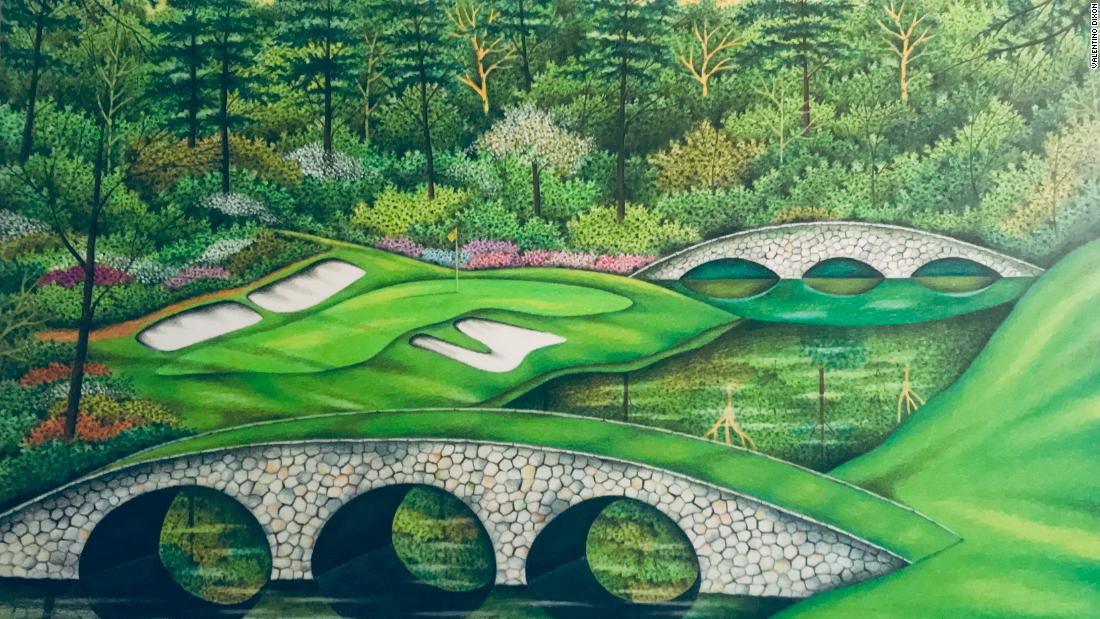 (CNN)Caged for a murder he didn’t commit, Valentino Dixon sought solace in art.

Art became Dixon’s salvation, and he drew for up to 10 hours a day, wearing his colored pencils to the nib.
His reputation as an artist led the warden at the tough Attica Correctional Facility in upstate New York to ask him to draw Augusta National’s famous 12th hole from a picture in Golf Digest.
Dixon was no golfer, and was reluctant at first, but the images of vivid green grass, clear blue skies, water, flowers and trees fired his imagination.

Fast forward to April 2019, and Dixon — exonerated in September 2018 after 27 years in prison — was invited to the Masters at Augusta to sketch for Golf Digest and to walk in the pictures previously only in his mind.
“I don’t have no words to describe how beautiful it is,” Dixon told CNN Sport. “It was 10 times better than I expected.
“It was emotional. At one point I wanted to slap myself because I didn’t think I was really standing there. I thought it was a dream or something like that. Not in a million years would I have thought this would be my reality.
“For a kid from the inner city, a very tough environment, it just means everything in the world.”
Visit CNN.com/Sport for more news, features and videos

At a dinner on the eve of the tournament Dixon met with Tiger Woods, who went on to clinch a remarkable 15th major title.
“He was asking me about my drawing, asking me to talk him through how I put together a piece. He said he was going to try his best at the tournament. I said, ‘No man, you’re going to win this tournament.'” Four days later Woods clinched his fifth Green Jacket, 14 years after his last following a tale of scandal, loss of form, injury and arrest.
Dixon’s love of drawing golf scenes had given him only a passing interest in the game, but he was glued to Woods.

“The fact is that where I come from it’s a struggle to make it, to be something in life,” said Dixon. “There’s a lot of obstacles in the way. I think black people identify with Tiger as one of us, being a struggler in a world that at times can be extremely prejudicial towards you.
“We look at Tiger as a person that beat the odds. Like Rocky, who didn’t have the skill to beat Apollo Creed but for some reason pulled it off through pure determination, pure willpower. Tiger had his fall with his personal problems. I became his biggest fan. I wanted to see him prove to the world he could do it again.
“These are the things that kept me strong all those years in the penitentiary, seeing stories like Rocky and identifying with the underdog and the person who wasn’t supposed to make it. I walked out of prison at 49 but I was determined to hang in there and make something of myself. That was why I walked out of there with thousands of drawings because I pushed myself every day.”
READ: Masters win is ‘surreal,’ says Woods
GALLERY: Tiger Woods: From highs to lows

‘Eats at your soul’

Dixon was 21 when he was arrested for the shooting of Torriano Jackson during a disturbance outside a bar in Buffalo on the night of August 10, 1991. He admits he was at the scene, and acknowledges his record wasn’t exactly squeaky clean, but he always maintained his innocence
“It’s the worse feeling in the world. It eats at your soul and it kills you slowly,” he said of being wrongfully imprisoned.
For the first seven years in prison he struggled badly.
“I was in such a depressed state,” he said. “I didn’t have the spirit to draw. I didn’t do anything but hang out and waste away.”
His uncle encouraged him to pick up the drawing again and sent him some art supplies. “I started doodling a little bit and I haven’t stopped since,” he added.
Golf was not a subject he chose deliberately. But when the warden knocked on his cell door clutching a picture of his favourite hole at Augusta, it changed his life.
“I didn’t really want to draw it, to be honest with you, because I didn’t know if the other inmates would turn on me,” he said.
“The warden was a good guy, but where I come from the inmates don’t golf. Maybe one out of every 100 golfs. So I took a chance and said, ‘Alright, bring it in, I’ll draw it.’
“The inmates pay attention to everything, but they fell in love with the 12th hole too. Another inmate said I should do some more golf courses. He planted a seed and a couple of weeks later I started drawing every day. The rest is history.”

In 2012, he sent some of his art work to Golf Digest’s editorial director Max Adler for his “Golf Saved My Life” column. Along with the pictures, he included details of his case. Adler was intrigued and dug deeper. Golf Channel got involved, too. Meanwhile, several appeals against his conviction had failed. But then in January 2018 three undergraduate students and their professors from Georgetown University thoroughly researched Dixon’s case as part of their studies.
The students re-interviewed witnesses and officials and unearthed new evidence. Another man, LaMarr Scott — already serving a life sentence for his part in an armed robbery in 1993 — confessed again to shooting Jackson, just as he had on the night it happened.
“The guy that committed the crime turned himself in,” said Dixon. “He felt bad about me being arrested. They told him they didn’t believe him and told him to leave the police station. Then eight witnesses told them I didn’t commit the crime.”
Through the work of Adler, the students, his daughter Valentina (who was four months old when he was arrested) and attorney Donald Thompson, paid for by Dixon’s wife Louise — whom he married while in prison — the fresh evidence was presented to the new district attorney of Erie County, John Flynn.
Dixon was exonerated on September 19, 2018.
At Augusta, Dixon showcased his work and handed Nicklaus a signed drawing of the 13th hole he had done while in prison.
Nicklaus, whose record of 18 major titles Woods is chasing, said meeting Dixon was “one of the most memorable moments” of the Masters. Nicklaus said Dixon’s attitude reminded him of Nelson Mandela.
“I spent a fair amount of time with Mandela,” Nicklaus told Dixon. “He came out, he didn’t have any malice, he loved his fellow man, he was such a great leader for South Africa. I have great respect for Nelson Mandela, as I have for you.”

Dixon says he “never felt any malice or hate towards anybody” because of his situation. “I was upset but I’m just not that type of person. Over the years I tried to change the way I felt and be angry and bitter but that’s not who I am. God wouldn’t ever allow me to change the way I am as a person. I kept my spirit strong, just kept being a loving person and just dealt with the situation.
View this post on Instagram

‪Friends for life. A day I dreamed about with the man who made all of this possible @maxadlergd at #TheMasters #golfdigest Persistence and drive -V.D.‬

“I look at other people suffering in the world and thought there’s people doing worse than me and I’m in a prison cell. You have to count your blessings. I was healthy, I had my sanity — I had friends that lost their minds or committed suicide in prison — I had family support.”
Despite his new-found celebrity in the world of golf, Dixon has still only played the game twice.
“I’m no good at it but I enjoy it,” he said. “I’ll stick with the drawing and let the golfers golf.”
He is still rekindling relationships and helping out family members after so long incarcerated and plans to release a line of greetings cards alongside his work as an artist.
Dixon longs to be reunited with his Australian wife — they talk every day on the phone — but she was deported for overstaying her visa and isn’t allowed into the US. Dixon can’t leave.
Given his experiences, he is also fighting for prison reform and a reduction of prison sentencing, which he claims is “ridiculous and excessive” and a “violation of human rights.”
Mainly, though he wants to improve himself, as a man and an artist, if not necessarily a golfer.
“I’m just going to be the best I can be and push myself to the limit. As far as I can go,” he said.