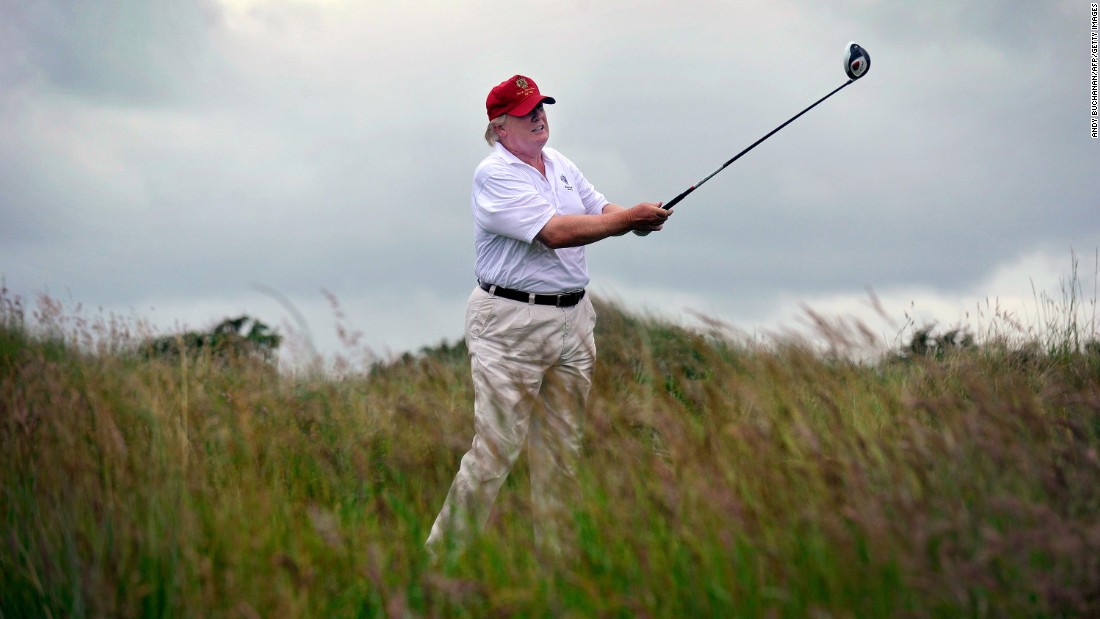 West Palm Beach (CNN)President Donald Trump has made visiting his Florida golf courses a near every-weekend habit in the first month of his administration, and his aides are trying to obscure whether Trump is actually golfing during the visits.

One possible reason: Trump was a frequent and vocal critic of President Barack Obama’s golf habit, regularly slamming the former president for playing golf with many pressing issues before the country. Trump even suggested during a 2016 event in Virginia, in a knock on Obama, that if elected he was “not going to have time to go play golf.”
“I’m going to be working for you, I’m not going to have time to go play golf,” Trump said at the time.
Trump has visited his two golf courses near his Mar-a-Lago estate — Trump International Golf Course in West Palm Beach and Trump National Golf Course in Jupiter — six times in his first month in office.

Aides would not confirm that Trump played golf each time, but through a series of social media posts and interviews with the professional golfers who joined him, it is clear the President golfed during most of these visits. By comparison, Obama played his first round of golf as President on April 26, 2009, at Andrews Air Force Base.
The level of secrecy around golf is new for the presidency, too. While the Obama administration was hesitant to allow cameras to regularly get shots of the President hitting the links, they would tell reporters who joined the President for each round. Trump’s nascent administration has not done that.
According to a picture posted by Clear Sports, a golf technology company, Trump hit the links at Trump International Golf Club on Sunday with Rory McIlroy, one of the top-ranked golfers in the world.
McIlroy later told No Laying Up, a golf blog, that he played a full 18 holes with the President, the CEO of Clear Sports and Paul O’Neill, the former New York Yankees right fielder.
The professional golfer said Trump “shot around 80” through 18 holes, eight strokes above the course’s par 72 layout.
The reported 18 holes of golf, however, directly contradicts how White House spokeswoman Sarah Huckabee Sanders described Trump’s visit to the golf course during a briefing with reporters on Sunday.
“I know he played a couple of holes this morning but I am not going to disclose any of the others that were there,” Sanders said, adding that Trump also “played a couple” on Saturday, as well.
Confronted by McIlroy’s comments about playing 18 holes with the President, Sanders said the President “intended to play a few holes and decided to play longer.”

“He also had a full day of meetings, calls and interviews for the new (national security adviser), which he is continuing today before returning to Washington, DC, tonight,” Sanders added.
McIlroy is not the only professional golfer to play with the President. While hosting Japanese Prime Minister Shinzo Abe in Palm Beach earlier this month, Trump played a full round with the foreign leader and professional golfer, Ernie Els.
Abe shared during a joint news conference with Trump that his golf scores are “not up to the level of Donald at all,” but he’s “always aiming for the cup.”
Presidents have regularly turned to golf as a way to relax from their abnormally stressful job. Obama reportedly played 306 rounds of golf in office, a far cry from the estimated 1,200 rounds Woodrow Wilson played as president.
But Trump made Obama’s golf a staple of his 2016 critique of the President.
“I love golf, I think it’s one of the greats, but I don’t have time,” Trump said during a December 2016 rally in Michigan. “He played more golf last year than Tiger Woods. We don’t have time for this. We don’t have time for this. We have to work.”
And even before he was running for president, Trump would tweet about Obama’s golfing.
“Can you believe that, with all of the problems and difficulties facing the US, President Obama spent the day playing golf,” Trump tweeted in October 2014. “Worse than Carter.”
CNN’s Gregory Wallace contributed to this report.