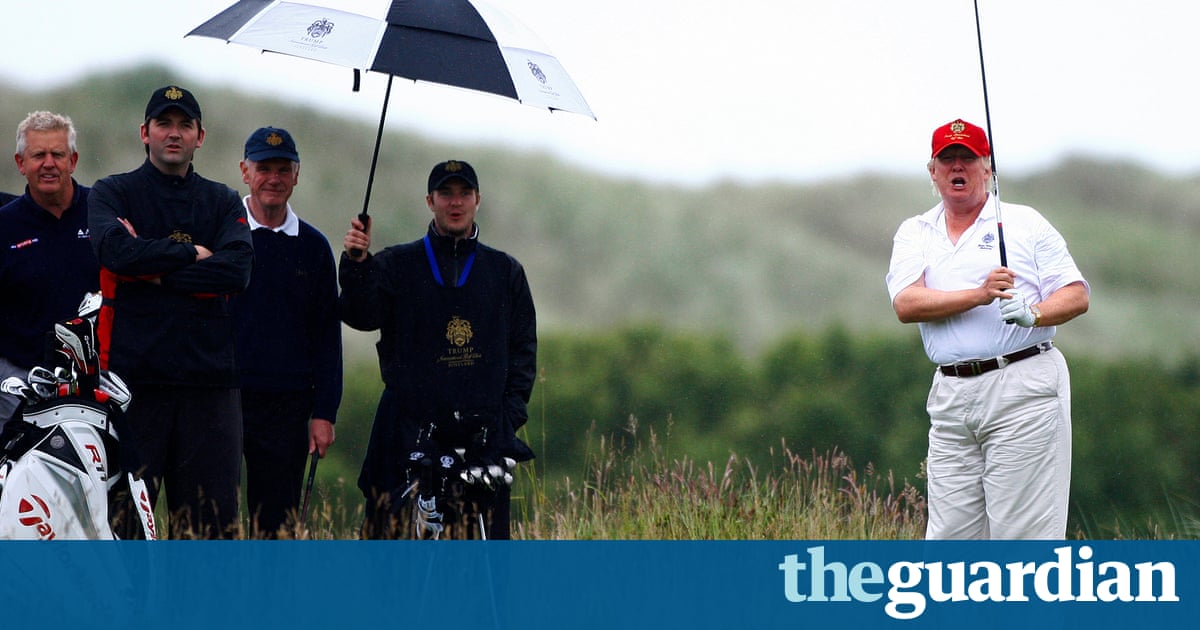 The Trump Organization faces further conflict with Scotlands environment agency after its revised plans for a second golf course near Aberdeen were rejected as inadequate.

Solicitors for the US presidents golf resort in Aberdeenshire said the company had dropped plans to use a stream to irrigate the course and to supply a man-made lagoon after the Scottish Environment Protection Agency logged formal objections to its proposals in July.

The Trump Organization has also offered far more detailed proposals for public access paths across the course, linked to a neighbouring country park, in an effort to meet concerns raised by Aberdeenshire council officials.

Sepa, the statutory authority that polices pollution legislation, has welcomed the concessions but intensified its objections to the Trump Organizations plans to continue using a temporary sewage drain near a cottage and the courses small clubhouse.

It has also insisted Trump agrees to a detailed and comprehensive environmental management plan during construction of the new course a proposal the company has again rejected.

There is a long history of conflict between the Trump Organization and conservationists over environmental protection on the site. Its coastal dunes, seen by Trump as central to the resorts dramatic setting, had their legally binding status as a site of special scientific interest removed in order to allow him to build his resort.

Conservationists were furious after Trumps resort unilaterally closed down last year an environmental advisory group that Trumps advisers had suggested be set up when he needed to win initial planning approval. It had included Sepa and Scottish Natural Heritage, another government agency, among its members but very rarely met.

The application for the second course was filed two years ago, and a local council committee has postponed consideration of it twice this summer due to Sepa and SNH objections. Local hoteliers and tourism officials back the plan, but 93,000 people have signed a petition organised by the US-based online campaigners SumOfUs opposing the development.

In a new exchange of letters with Aberdeenshire, the agency has said it will continue to oppose the golf course application unless the company connects both courses, the clubhouse and staff housing to the public sewage system at its own expense.

Trumps lawyers, CMS Cameron McKenna Nabarro Olswang, had told council officials it would only agree to put in a sewer if it was triggered by the additional load arising from the development and it did not affect the current onsite drainage system, known as a soak-away.

Sepa has rejected the proposal. It said the soak-away was approved only as a temporary measure until December 2018 due to concerns about the potential for impact on groundwater quality.

It said the Trump Organization had known it needed to build a proper sewerage connection ever since it won planning approval for the first course in 2010. It is clear that connection to the public sewer was agreed as part of the original golf course proposal before this new golf course was proposed, Sepa told the council last week.

Sepa thanked the company for dropping its plans to use the stream as irrigation, but insisted it built bridges and crossings over it able to withstand a massive one-in-200 years flooding event, building in an extra 20% capacity to cope with climate change.

It underlined several other conditions it wanted placed on the new course, including a ban on planting non-native plants near one hole and that Trump agrees to protect rare local habitats known as wet dune heath and slack communities.

It said the environment management plan condition must be enforced, and require written approval from Sepa and SNH before work on the new course is carried out. Sepa said that was necessary to control pollution of air, land and water.

Trumps company, Trump International Golf Course Scotland, now run by his son Eric, had to employ a specialist ecological clerk of works to inspect the construction work every day, Sepa said. Its rules would include: all waste water should be sealed up and taken off site; pollution prevention works to prevent contamination from oil spillages was needed; and strict control on any pesticides to prevent groundwater or rare plant contamination.

SNH has already told the council it is unhappy with the design of the new 18-hole course, which Trump plans to name the Macleod course after his Scottish-born mother Mary Macleod, because of its impact on the coastal dunes. The dunes naturally move and change shape, but the company plans to stabilise and wall them up.

In their latest letter, Trumps lawyers do not address those concerns. Instead, they told the council on 15 August: We are encouraged that there are only a small number of outstanding matters, which we hope can be resolved by the information enclosed with this letter.

Those enclosures were new maps showing the plans for the stream and public access, and a seven-year-old study and drawings of water abstraction and irrigation methods.