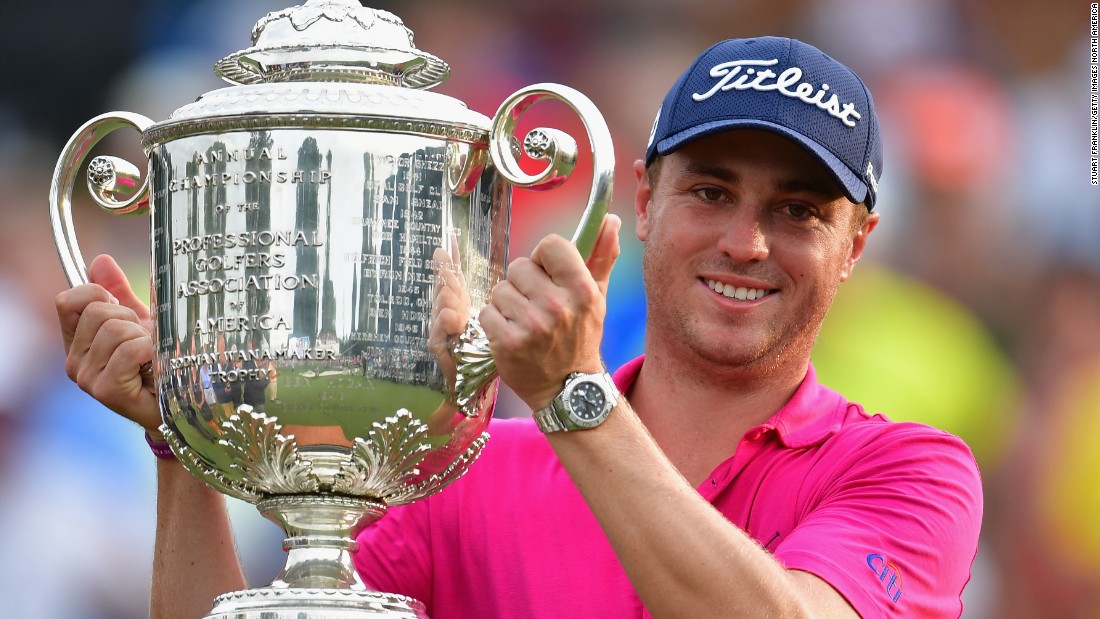 The 24-year-old American, a close friend of Jordan Spieth, won the PGA Championship by two shots after closing with a three-under 68 in North Carolina.
Follow @cnnsport
Thomas held a one-shot lead as he stood on the 16th tee, with the three testing holes standing between him and the Wanamaker Trophy, but played them in level par under the most intense pressure to close on eight-under-par 276.
He birdied the short 17th to give himself a three-shot cushion playing the final hole and could afford a bogey five to seal his victory.
Spieth, who needed to win at Quail Hollow to complete his career grand slam of major victories, celebrated Thomas’ triumph as he watched on by the 18th green.
He had earlier finished with a closing 70 for two-over-par.
Thomas, whose father Mike and grandfather Paul were both PGA professionals, said his triumph would take time to sink in.
“I really can’t put it in words,” he said. I wish my grandpa could be here to see it.”

Patrick Read had emerged as the closest challenger, but bogeyed the treacherous final hole to finish with a fine 67, sharing second place with Italy’s Francesco Molinari (67) and South African Louis Oosthuizen (70).
Hideki Matsuyama, bidding to become Japan’s first major winner, led going into the back nine, but with six men within two shots the final major of the season was set for a thrilling finale, with five men joint top of the leaderboard at one point.
Matsuyama, like Read within one shot of Thomas entering the Green Mile, fell away with bogeys on the 16th and 18th to finish in a tie with Rickie Fowler on five-under.

Fowler, another personal friend of Thomas, played superbly for a four-under 67, but his first major still eludes him.
Long-time leader Kevin Kisner went back to seven-under when he birdied the 15th, but three shots dropped from there saw him slip back to four-under, while Chris Stroud also struggled in the final group with a 76.
Except for Rory McIlroy, the 2012 and 2014 champion, every PGA winner since 2008 has been a first-time major trophy-holder, with Thomas, a three-time winner on the PGA Tour this season, maintaining that record.

He was helped by an unusual birdie on the 10th as his ball took and age to drop and a spectacular chip-in birdie from 40-feet on the 13th to move to the front.
“The putt on 10 was funny because it snuck up on the hole,” said Thomas.
But when he failed to birdie the 14th and 15th the field closed up again only for the leader to regain control by rolling home his curling birdie putt on the 17th.
McIlroy, who went into the week as pre-tournament favorite, at least finished with a flourish with a 68 to close on 285, but will have to wait until next year’s US Masters for another tilt at a fifth major where he will find likely stiff competition from the likes of Thomas, Spieth and Fowler.