Late-night hosts on getting Trump’s attention: ‘Go protest on the golf course’

Comics, including Trevor Noah and Stephen Colbert, discussed the presidents stance on climate change and the James Comey hearing 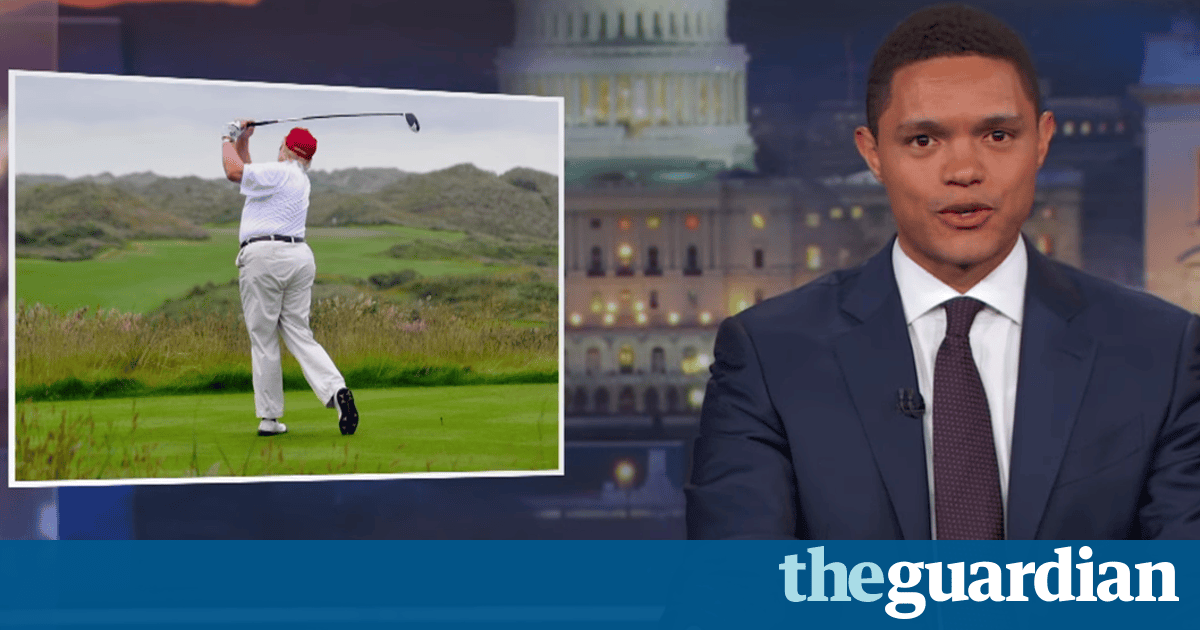 Late-night hosts took aim at the most recent events in the White House, including the presidents stance on climate change.

On The Late Show, Stephen Colbert discussed the fallout from his string of insults aimed at Donald Trump on Monday. Despite many Republicans expressing their distaste, Colbert said he doesnt regret it. I believe he can take care of himself, he said. I have jokes, he has the launch codes.

He also claimed to feel mildly nauseous that he might have affected the outcome of the election. Mildly nauseous? Colbert said. Maybe its morning sickness. After all, you did screw the whole country.

He then referred to Sean Spicer as press secretary and dad barely holding it together in the Six Flags gift shop as he refused to answer questions at yesterdays press briefing, walking away from journalists.

Holding up a lighter, Colbert joked: Play largest inauguration crowd in history, play Ill have to get back to you on that, mispronounce something woooo.

On The Daily Show, Trevor Noah spoke about the climate march but denied that Trump would be affected as hes never at the White House. If people really want to get Trumps attention, go protest on the golf course, he joked.

He then detailed the problems that climate change could mean for his luxury Mar-a-Lago resort. President Trump, if by some miracle you see this clip, I just want to say this: you might not care about climate change, but I know you care about winning which is why, youre not going to let climate change kick your ass by flooding your winter wonderland, he said. Come on president Trump, its time to stand up and tell the world nobody sinks your properties but you.

On Late Night with Seth Meyers, the ex-SNL comic used footage of a journalist claiming that Trump has stated he is doing the best he can do. At least Trump is finally saying something I actually believe, he said. I do believe that this is the best he can do.

Regarding the healthcare reform, Meyers said: The whole thing is like the suitcase of a kid whos saying hes running away from home. It looks like he has a plan but if you open that suitcase up, all youre going to find is some loose Legos and a sleeve of Ritz crackers.

He also played footage of budget director Mick Mulvaney, who spoke yesterday about how increased healthcare for coal miners will be introduced because they offered something in return. He just admitted they used the health of coal miners as a bargaining chip, he said. Mulvaney sounds like a Bond villain who explains his plan while Bond escapes.