Back in spotlight, Sean Spicer is forced to defend president celebrating domestic achievements despite his own companys overseas manufacturing 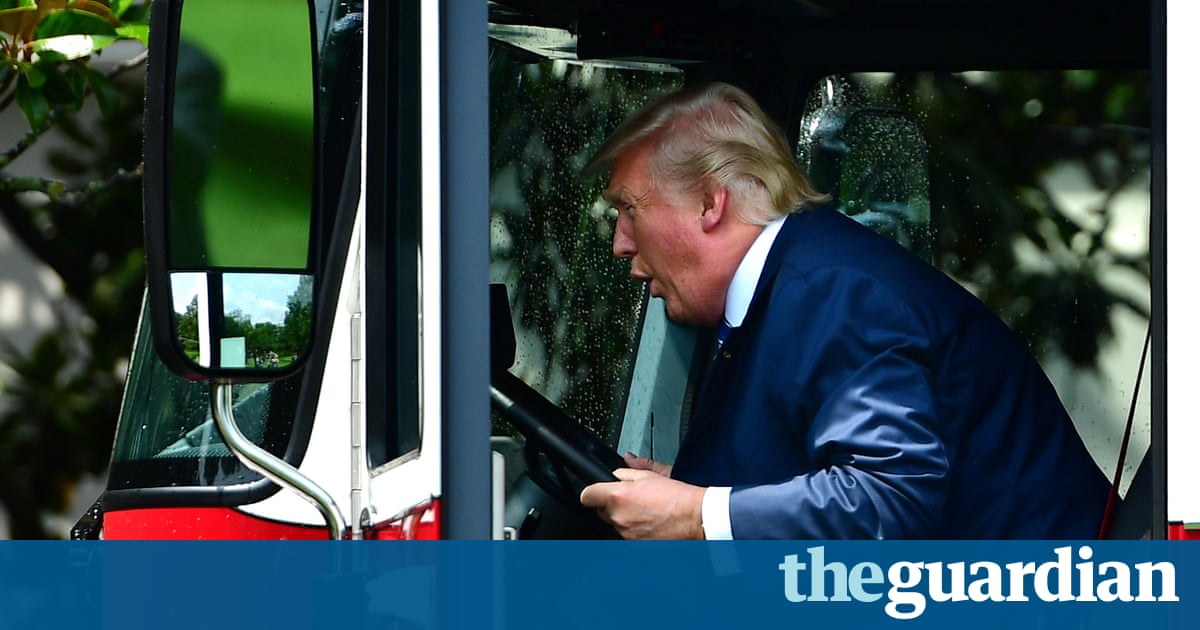 It is many a little boys fantasy. When a shiny red fire engine turned up on the White House lawn, Donald Trump, 71, could not resist hopping inside. Wheres the fire? the US president joked. Ill put it out.

Trumps critics might suggest he spends more time starting fires than putting them out.

Widely mocked for honking the horn of a truck on the White House lawn in March, Trump faced potential ridicule again on Monday as he surrounded himself with vehicles and products from all 50 states to launch his made in America week.

From the state dining room to the south lawn, the executive mansion came to resemble an Amazon warehouse with lots of stuff: baseball bats, beer, door hinges, fried chicken, horseshoes, guitars, a lawnmower, a Nasa space suit, wheelbarrows and, inevitably, golf clubs. The property tycoon-turned-president tried on a cowboy hat. No one dared called him a cowboy builder.

But as he surveyed this museum of American capitalism, Trump did not address the central paradox of why many of his own companys products, and those of his daughter Ivanka, are manufactured overseas.

That was left to Sean Spicer, the White House press secretary, returning to action after a prolonged absence. He addressed reporters in the West Wing briefing room for the first time since 26 June. But once again cameras were banned; the White House has not held a televised briefing since 29 June.

Spicer has previously claimed that he does not want to be filmed on days when Trump is speaking in public so as not to distract from the presidents message. And this was a day when Trump, surrounded by consumer paraphernalia in the East Room, was in full salesman mode.

The gentleman who was in charge of Omaha Beef they do beef he hugged me, he wanted to kiss me so badly, he said jovially, celebrating the return of American beef exports to China.

Then, characteristically, he delved into nostalgia that strikes a chord with his base. Remember in the old days they used to have Made in the USA … Were going to start doing that again.

And not for the first time, it came with a blunt nationalist agenda. No longer are we going to allow other countries to break the rules, steal our jobs and drain our wealth and it has been drained. It has been drained.

Trump has withdrawn the US from the Trans-Pacific Partnership, promised to renegotiate the North American Free Trade Agreement and slashed rules and regulations he claims are harmful to American workers. He declared: We will turn boarded-up communities into new outposts of American commerce. And we will once again rediscover our heritage as a manufacturing nation.

According to a White House pool report, Trump and his vice-president, Mike Pence, spent about five minutes on a damp south lawn, viewing a yacht from Maine, a forklift from Mississippi, an excavator from Oklahoma and that fire engine, which Trump described as beautiful, from Wisconsin. The Connecticut-made Marine One helicopter was in its usual spot.

But notably absent were any of the Trump-branded products that are outsourced to a dozen countries including China, India, Bangladesh, Indonesia and Vietnam. Ivankas clothing line is also made exclusively in foreign factories, according to a recent Washington Post investigation.

Daniel Wessel, a spokesman for the Democratic National Committee, said: Made in America Week is the epitome of President Trumps hypocrisy. Trump says we need to make more products here in America, but he outsources his own products and Ivanka Trump makes her products exclusively in foreign factories.

Trump is putting his own interests and profits ahead of those of American businesses and workers. Instead of lecturing us, Trump should try setting an example.

Shortly before the showcase, Spicer made his long-awaited return to the briefing room, where his deputy, Sarah Huckabee Sanders, has been fending off questions lately. One reporter said: We miss you, Sean. He replied: Well, I miss you too.

Asked if Trump was the right vessel for the made in America message, Spicer attempted to square the circle. I actually look at it in a very different way, which is the president has been a very successful businessman on a number of fronts and a number of areas and industries, and to understand first-hand what the tax burden and what the regulatory burden do to a business that wants to grow or expand here or hire here, he said.

So I think he actually in a very unique way understands the challenges that our regulatory system and our tax system put on businesses that want to hire here, that want to grow here, that need scalability and capacity here in a way that maybe isnt because of some of our arcane trade laws, our regulations or our tax laws.

He added: So I actually think that hes in a very unique way able to talk about the challenges that so many of these companies face as they choose to expand, and some of the tariffs and quotas that they face in other markets.

Spicer, inevitably, also faced questions about Donald Trump Jrs June 2016 meeting with a Russian lawyer and Russian American lobbyist, set up on the pretext of receiving incriminating information about Hillary Clinton. He insisted: There was nothing, as far as we know, that would lead anyone to believe that there was anything except for a discussion about adoption and the Magnitsky Act.